MindBot is coming, the robot that reacts to worker stress 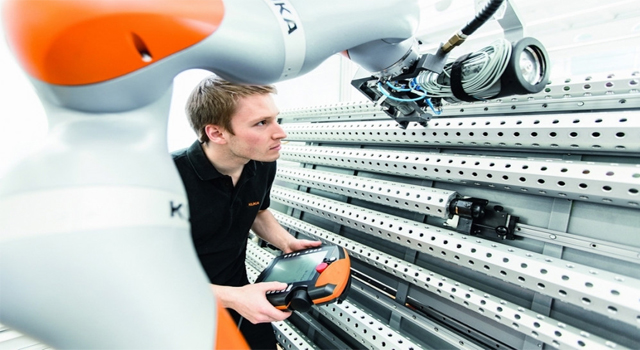 A robot that not only supports the worker in the factory, but is able to ‘perceive’ the stress and consequently modify their behavior to make them more comfortable.

Here is the innovation that the project aims at Mental Health promotion of cobot Workers in Industry 4.0 , created by the Area of ​​Applied Technologies of the IRCCS Medea of ​​ Bosisio Parini (Lecco). An innovation recognized by the European Union: the project has won a Horizon 2020 call.

They are called cobot and are the robots that collaborate with humans: they are already a reality in industry 4.0 and with their human partners they share work spaces and tasks. Synonymous with technological and digital innovation, they are self-employed colleagues, capable of interacting and learning .

The forecast is for their growth in industry and the manufacturing sector, to free workers from the most demanding and demanding tasks. But with what consequences on workers’ motivation and well-being? Here is the question that the Lombardian IRCCS asked, together with others, namely: what social challenges await the world of small and medium-sized enterprises and industry? How can we ensure that the most vulnerable part of the workforce – that is man – is protected from a mental health point of view?

High technology at the service of the person

The answer could be represented by the MindBot project, a collaborative robot that realizes the state of stress of the worker and modifies his interaction with man to make him more comfortable; understands when it’s time to slow down and take a break or when it is possible to push on the accelerator .

The kick-off meeting with Italian and European partners was held in Bosisio Parini in late January.

The project will run for three years. Among its peculiarities is that of also involving subjects with autism , who could be among the beneficiaries of the technological innovation produced.

“We aim to develop employment models suitable for the skills of individual people – explains Gianluigi Reni , creator of the project and Head of the research area in applied technologies of Medea – : useful models also for subjects diagnosed with autism spectrum disorder “.

“MindBot has its roots both on engineering skills and on Medea’s research activity in the field of inclusion of people with disabilities in the world of work”, also stresses the Scientific Director of Medea Maria Teresa Bassi -: an example of high technology at the service of the person “.

The research team includes partners with specific skills in psychology, business organization, rehabilitation, cobot-human operator interface, artificial intelligence, wearable sensors, as well as one of the major European robot manufacturing companies and a Ministry of work.

In addition to the IRCCS Medea coordinator, the University of Milan , the National Research Council (Institute of Intelligent Industrial Systems and Technologies for Advanced Manufacturing STIIMA, Unit of Lecco) participate in the project ), the Belgian company Biorics NV , the German artificial intelligence research center DFKI , the Croatian University of RiJeka </ strong >, the German robot manufacturer Kuka , the German University of Augsburg and the Croatian Ministry of Labor.

The multidisciplinary approach will allow you to explore all aspects of the work – technological, relational and organizational – using subjective and objective indicators (such as self-assessment measures and sensors) and will allow you to identify protection and risk factors for mental health during cobot activity.

Specific attention will be given to the use of cobots to facilitate the job placement of people diagnosed with autism spectrum disorder.

Among the objectives, the definition of organizational guidelines for the design of a production environment based on the cobot; the realization of the MindBot prototype ; the definition of an employment model for people diagnosed with autism spectrum disorder who work in small and medium manufacturing enterprises that adopt cobots.

Above an image of the MindBot team (© KukA)